Everything You Need to Know About Boulder’s Most Beloved Holiday Tradition: The Boulder Star 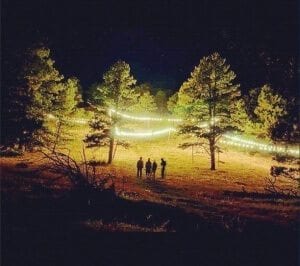 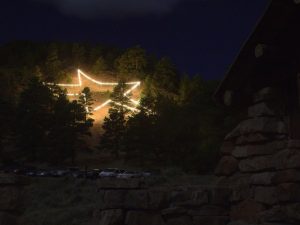 Starlight, star bright, the only gigantic star you’ll see on the side of Flagstaff Mountain tonight. There’s no need to tell locals what the Boulder Star is. It’s iconic. It’s Beloved. It’s Inspiring. And honestly,  it’s hard to miss. The giant star is the city of Boulder’s most beloved holiday tradition. It’s like the Hollywood Hills sign…. but more festive, and more us.

The star means something different to everyone. For some, it represents the true start of the Holiday season. Lights are strung and seasonal music starts playing—not after Thanksgiving—but after the Boulder Star lighting.

For others, it’s a nostalgic figurehead. Memories of lighting ceremonies are shared between generations of families.

For Craig Reynolds, the man who volunteers his time maintaining the impressive display, it’s the place where he proposed to his wife.

For veterans and their families, it’s a powerful tribute to their service and sacrifices. The city of Boulder dedicates the Boulder Star lighting to our soldiers every year. The lighting takes place every year on Veterans Day. If you missed this year’s November 11th lighting, you can watch the youtube live stream here.

History of the Boulder Star

The star was first lit in 1947. The mission of the project was fairly straightforward.

The city of Boulder wanted to create a holiday tradition that belonged to Boulder only. Simply, they thought it would be fun to be festive (Spoiler alert: they were right).

The following year, in 1948, officials chose to convert the pattern into an Easter Cross. For years following, the pattern alternated haphazardly. The beacon always made an appearance during the holiday. Whether it would be a star or a cross? No one knew until they saw the flickering of the first bulb. 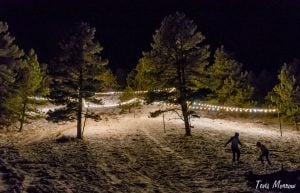 It’s no surprise something so iconic has been a source of temptation for pranksters and vandals through the years. The star was first vandalized in the 1950s by a group of students from Colorado A&M (now Colorado State). The students snuck onto the mountain and transformed the star into an “A”. Their rivals from the Colorado School of Mines retaliated by switching it to an “M” the following day.

In the 1960s the vandalism turned political. Suspected communists painted the bulbs red. Every time the city would clean off the bulbs, the vandals would find a way to sneak onto the property again.

In 1969 the politics of the star continued. Members of the community claimed that the star/cross was a violation of church and state. They claimed that stars and crosses were blatant Christian symbols. This was unconstitutional since the light display is on city property. The city of Boulder conceded. They transformed the holiday display into a giant peace sign that year. The following year, however, the star was back. But that was the last Boulder saw of the Easter cross.

During the 1980s the star was lit off-season for the first time. The city of Boulder lit the display in February in recognition of American hostages held in Iran. But a group of locals took issue with the off-season display. They claimed it was environmentally wasteful and poor use of city funds. The debate sparked productive change. Now, the star’s 365 bulbs use long-lasting, energy-efficient LED bulbs. The electricity is powered by nearby wind farms.

2020 will surely go down in the history of the Boulder Star. For the second time in its 73- year tenure, the star was lit off-season. The city lit the star on March 23rd, in hopes that it would serve as a beacon of unity throughout the COVID-19 pandemic. 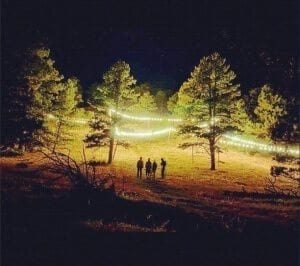 Wondering if you can embark upon a star trek? Not this year, unfortunately. Or probably for a while.

Naturally, the Boulder Chamber of Commerce is discouraging groups from gathering. Pandemic safety is the first priority.

But also…73 years of pilgrimages to the famous star site has taken a toll on Flagstaff Mountain. Unfortunately, human tread has caused rapid erosion and plant destruction. It’s left leaving this section of the mountain barren. Boulder citizens share a deep passion for preserving our beautiful land. In response, the hike up to the Boulder Star is closed for revegetation. New fencing has been installed around the star site to discourage the rebellious. A $1,000 fine or 90 days in jail is the punishment for anyone who violates the star’s boundaries.

If you’re an avid hiker hoping to tread lightly on other local trails here’s one thing you can do:

Stay on the trails. Don’t stray from designated paths. This goes a long way in preventing erosion and plant destruction.

But that doesn’t mean you can’t enjoy spectacular views of the star!

Instead, we encourage you to support local businesses. View the star from one of Boulder’s rooftop decks or parks.

The Best Restaurants for Viewing the Boulder Star: 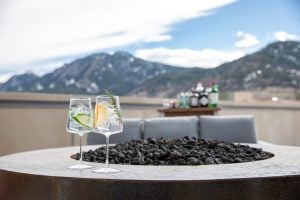 This upscale Spanish eatery has incredible views of Flagstaff mountain. They have an impressive wine list and an assortment of tapas. Their rooftop deck has personal heaters for each table. Only four of their rooftop tables give way to a view of the Boulder Star. So if a view of the star is important to you, mention it in your reservation notes and their staff will happily accommodate you.

Make a reservation for Corrida here.

A casual but festive spot for Boulder Star viewing. This Mexican restaurant has panoramic views of Flagstaff Mountain, including the star. Don’t forget to try the enchiladas while you’re there… they’re a staff favorite.

Good news for any of you cold-natured stargazers out there. The Sink introduced heated dining pods on their patio this year. The Sink is known for its famous Sinkburger and “ugly crust” pizza. Both have been featured on shows like The Food Network’s Diners, Drive-ins and Dives, and The Travel Channel. Famous visitors such as Madeleine Albright, President Obama, and Anthony Bourdain have dined here. Robert Redford also worked here as a janitor when he was a student at CU. The Sink is a favorite haunt for CU Boulder students, families, and visiting tourists.

Make a reservation for The Sink here. 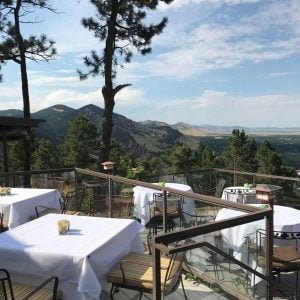 On a normal year, the Flagstaff House is the best spot for getting as close to the shimmering star as possible. The views of Boulder at sunset are so fabulous here that the space doubles as a wedding and event venue. Unfortunately, the restaurant is closed in 2020 to protect its patrons and staff from the COVID-19 pandemic. Keep a close eye on this spot in future years though. Its views are truly breathtaking.

Make a reservation for the Flagstaff House here.

The Best Trails for Viewing the Star:

Before you head out on your adventure, check here for updates on local trail closures.

Panorama point is a 4.7-mile loop trail rated as moderate. This trail will take you through forests, meadows, and, as the name suggests, panoramic views.

A 1.8-mile out-and-back trail. This trail has viewsheds of the Flagstaff Mountain peaks and twinkling Boulder city lights.View map of the Viewpoint Trail.

This 3.6-mile loop trail is a hotspot for hikers, runners, and climbers.

The shortest hike for viewing the Boulder Star, the Flagstaff Trail to Halfway House trail clocks in at only 1.5 miles, out-and-back. For that reason, it’s the safest route for night-hiking. As a bonus, this trail has the clearest viewshed of the Boulder Star.

Alright, you caught me. This one isn’t a trail. But this greenspace is open until 11:00 pm and has great views of Flagstaff mountain. It’s a great option for a night picnic or anyone who doesn’t feel comfortable with night hikes.

Want to support the upkeep of this holiday tradition?  Purchase a bottle of Star Wine created by Bookcliff Vineyards. $1.50 of each bottle helps keep the lights on. It’s a delightful blend of merlot, cabernet sauvignon, malbec, and Petit Verdot. The art on the wine label was designed by local artist Julia Williams. You can also find this artwork on the annual star holiday card.

What’s your Boulder Star story? What does it mean to you and your family? We’d love to hear from you!