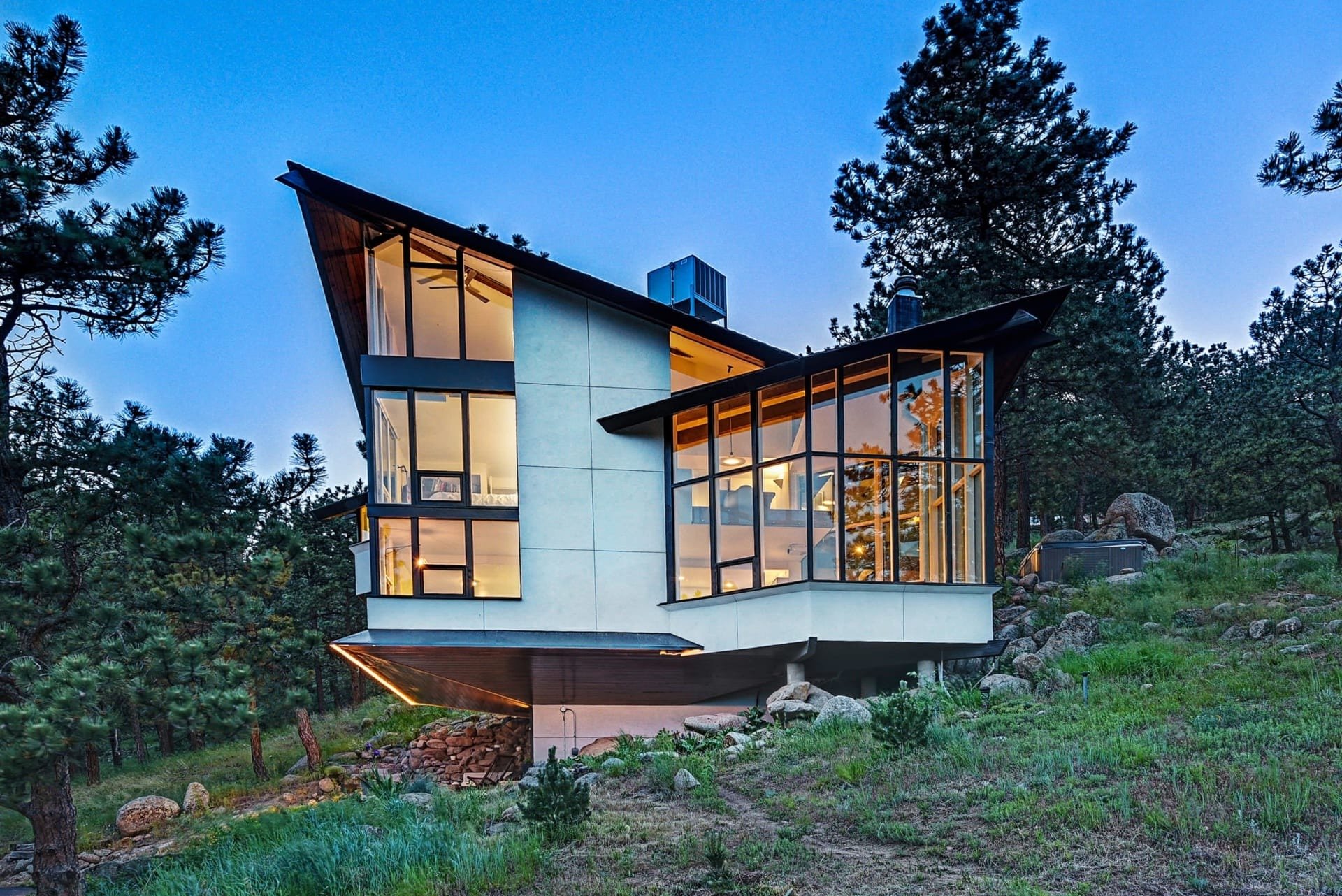 Charles Haertling designed homes reflecting an eclectic mix of different architectural styles and philosophies, incorporating elements of modernism and organic architecture, and drawing the outdoors in. Haertling often made efforts to harmoniously integrate his buildings with their physical environments and The Conlin House is a true reflection of this philosophy. You can check out our exlusive listing of the home here here.

The first known photo of The Conlin House, 1967

Built in 1967 by famed architect Charles Haertling, “The Conlin House” is just 5 minutes from Boulder nestled peacefully and privately among towering pines and large granite outcroppings in the coveted Seven Hills of Sunshine Canyon.​​​​​​​
Notes On Conlin House Design by Joel Haertling:

​​​​​​​“The Conlin residence is located just west of Boulder in the foothills. The house appears to point upward from below, due in part to a very high balcony on the front. The foundation is a pedestal, incorporating drastic overhangs that create a hovering effect. A model illustrates the cantilevered design. A different model photograph also shows the top of house.

​​​​​​​Giant wood beams uphold the towering cathedral ceilings in this glass tiered multi-level home. The spiral staircase at the center of the home organically connects all levels and offers a delightful juxtaposition to the prevailing geometric lines seen throughout. While peering out the three storied windows at beautiful blue skies, soaring pine trees, granite boulders, and the city of Boulder below, one feels to inhabit their very own luxurious tree house. A large deck built right into the mountainside provides outdoor living space and a chance to unwind in a private hot tub with views. 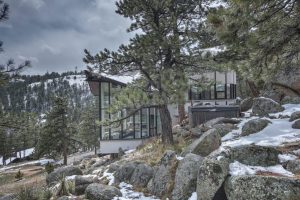 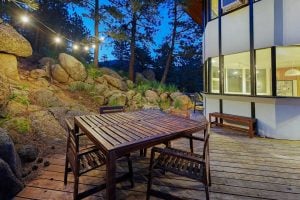 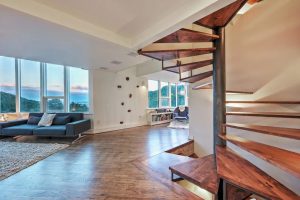 The tiered design of the home allows spectacular natural light to flow and permits a feeling of grandeur and openness. Each tier is open to the one below and thoughtful design features like glass panel railings and a climbing wall from the first tier to the third help to visually and physically connect the spaces.

Past stewards of this historical home have made thoughtful and respectful updates over the years. In 1983 a lovely earth-sheltered adobe sunroom was built just below and totally out of view from the main house. The cozy guest house boasts built-in seating, a private deck with views, a wood burning fireplace, and spectacular overhead atrium windows which allow stargazing from bed. 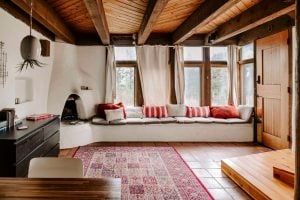 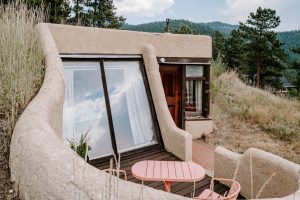 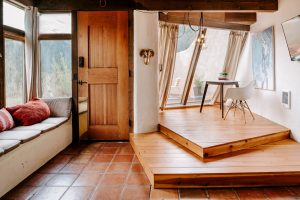 In 1988 an earth covered 2-car garage with ample storage was added to the property. In 2015 an interior remodel brought Haertling’s design up-to-date while honoring his initial vision and leaving behind era-specific details like the beautiful original wood burning stove and custom light fixtures. 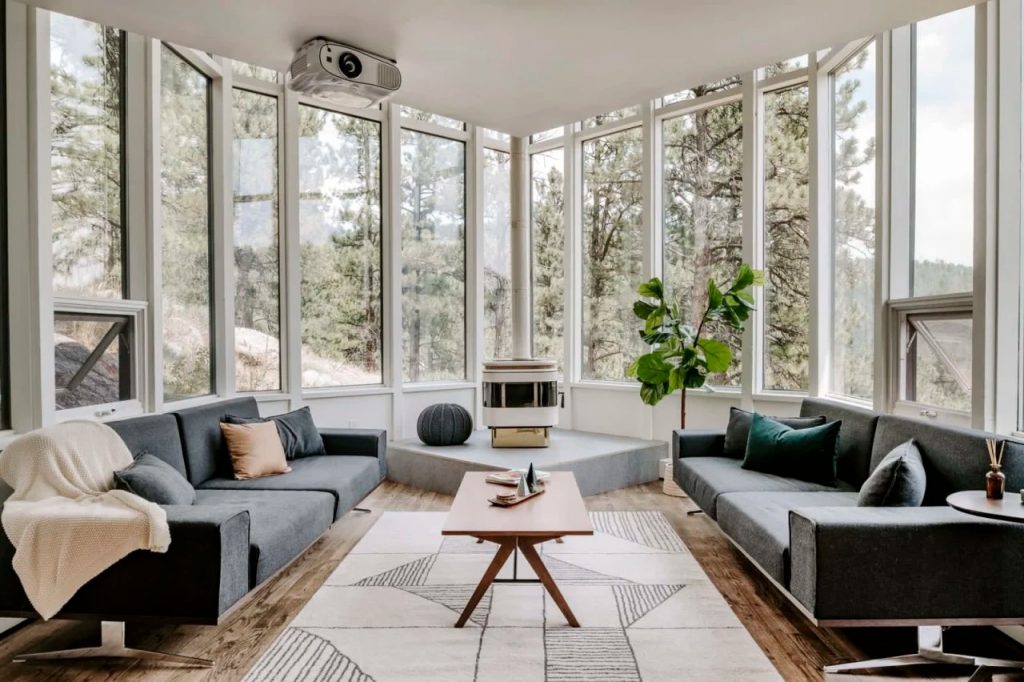 ​​​​​​​The second level features a spacious lofted dining area that capitalizes on views through glass panelled railings. The kitchen which features a quartz island and a full wall of windows opens to a large deck and private hot tub surrounded by towering granite boulders. A full bathroom, two bedrooms, and ample storage for either kitchen supplies or linens also occupy the second level. One bedroom features a lofted playspace with custom-built ladders and a play swing which can easily be removed. The other bedroom provides spectacular views through two walls of floor to ceiling windows. Both bedrooms have closets with built-in shelving. 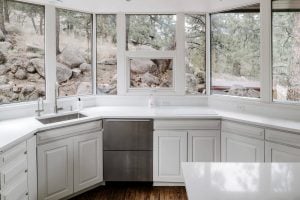 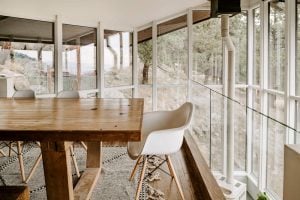 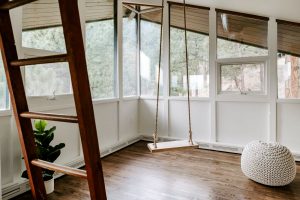 The third level serves as an all encompassing primary suite. The primary bedroom features a wall of windows overlooking granite boulders protruding from the mountainside, a built-in platform bed, cork floors, skylights, and storage closet. Relax under the luxury rain shower while bathing in the sunlight that streams through the skylights in the updated primary bathroom. Situated just steps from the bedroom and bathroom is a separate walk-in his and hers closet. Also on this level is a spacious office with vaulted ceilings, two walls of floor to ceiling windows overlooking Boulder, and lofted access to the lower levels by the climbing wall, which starts on the first tier. 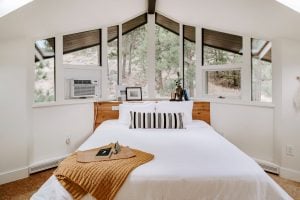 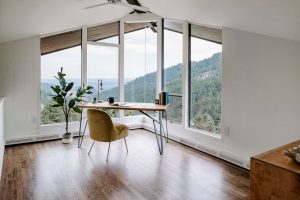 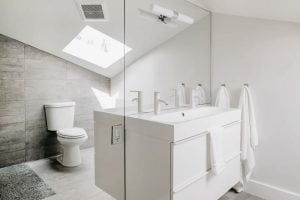 This home offers the privacy and peace of mountain living just moments from Boulder. The thoughtful and integrative design, one-of-a-kind architectural details, and historical narrative behind this spectacular home offers a unique and coveted opportunity. 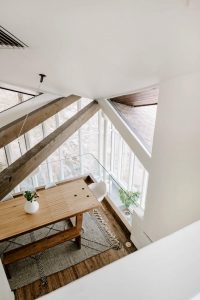 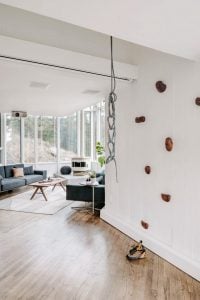 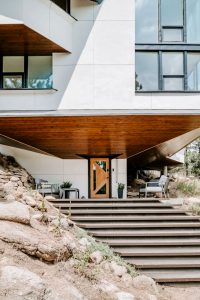 → James and Charles likely met while they were both working for the University of Colorado.

→ In 1974 the Conlins sold the home to travel the world. They eventually settled down in New Zealand where they lived for a year.

→ In 1977 the Conlins moved back to Colorado and opened the Lickskillet Cafe in Gold Hill. Sharon still lives in Gold Hill today. 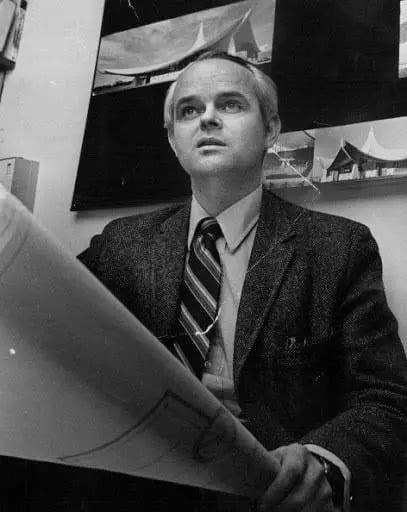 Each commission Haertling received involved in-depth interviews with the client to determine their particular needs. The personality of the client factored in greatly in the final resulting design. Even the children in families had their input in the process.

“The building has my signature, but if I kept my clients at arms length, all my buildings would look the same.”

​​​​​​​Haertling also wanted his work to contribute to the fabric of the city and to enhance the image and spirit of Boulder. To this end he strove to make the work progressive, innovative and exciting, representing the artistic and ruggedly individualistic nature of the community, and reflecting the physical environment, both earth and sky.

Other Famous Haertling Homes In Boulder 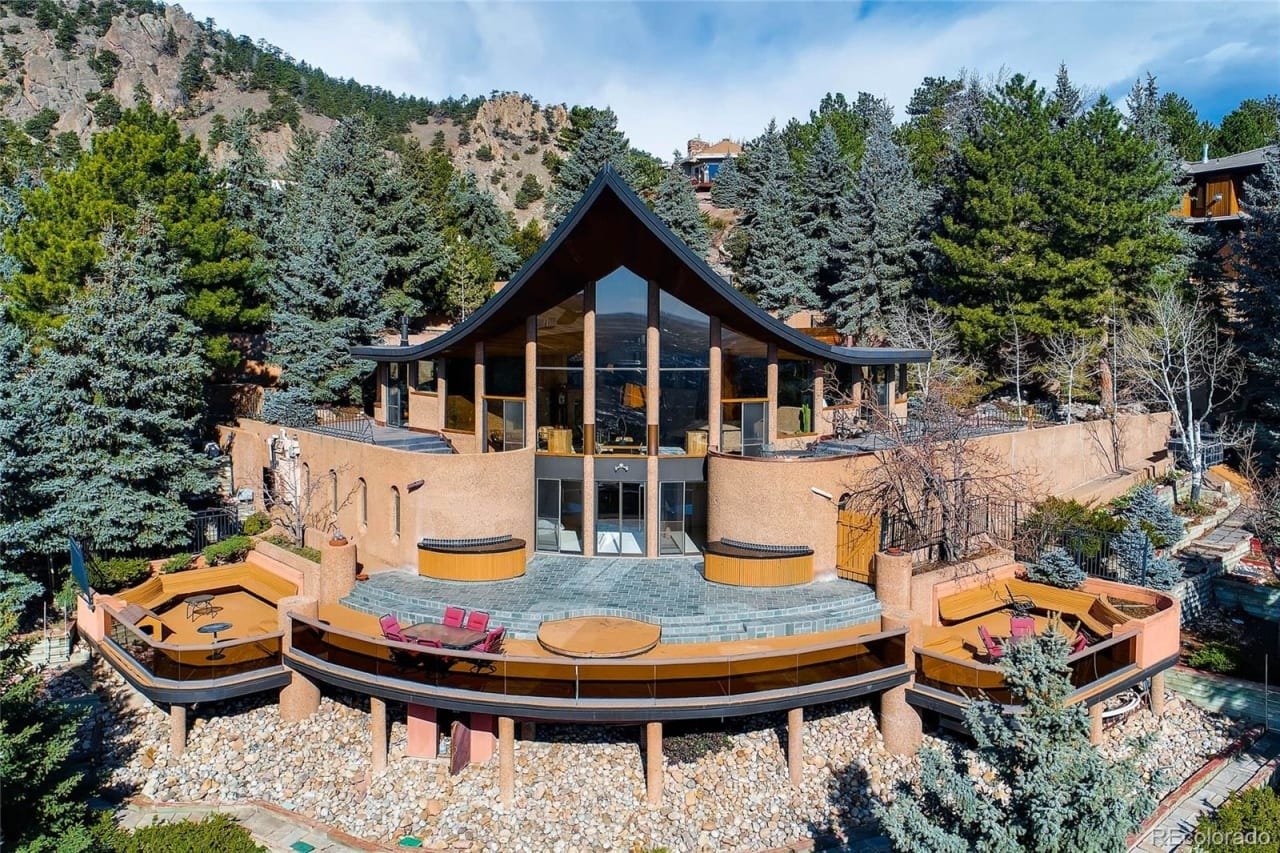 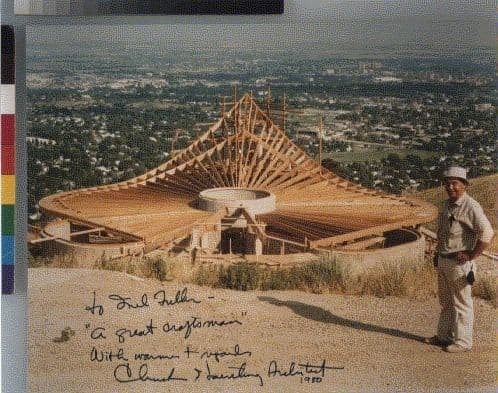 Charles Haertling in front of “The Aspen Leaf House,” his final work. The home features a flared copper roof, and offers a stunning view of the surrounding mountains and hills. 52 Boulder View Ln, Boulder, Colorado. 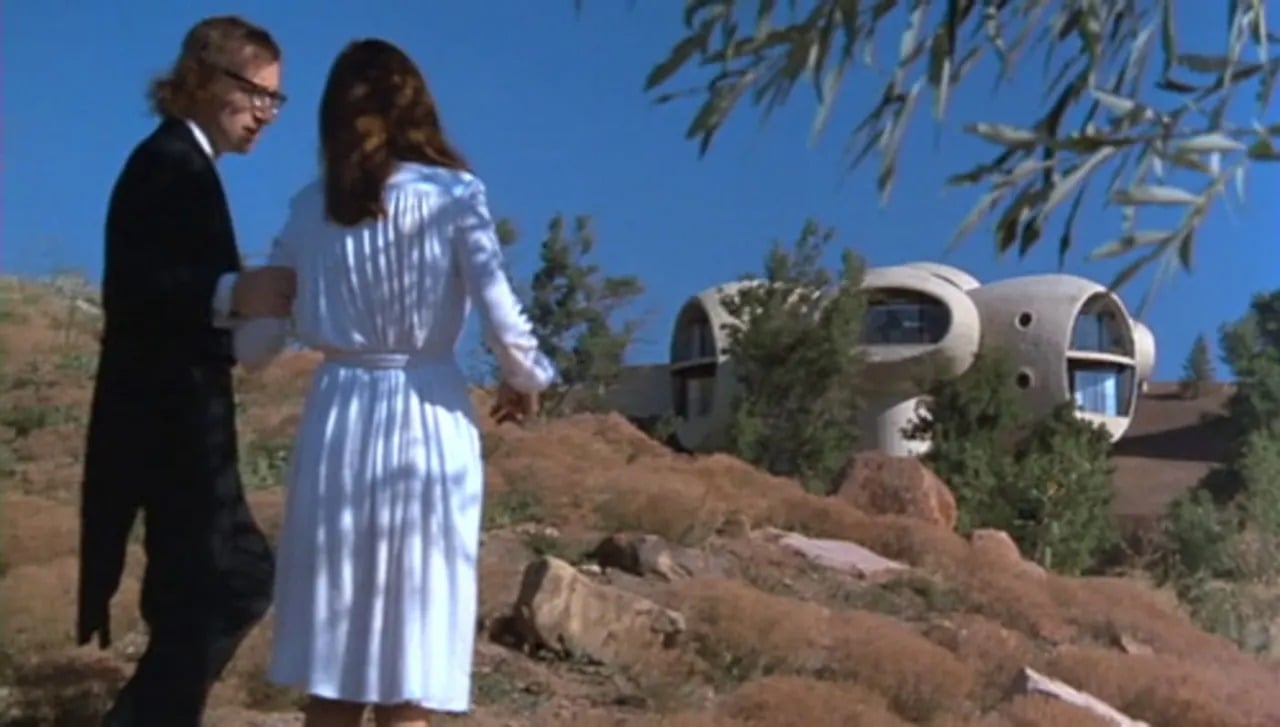 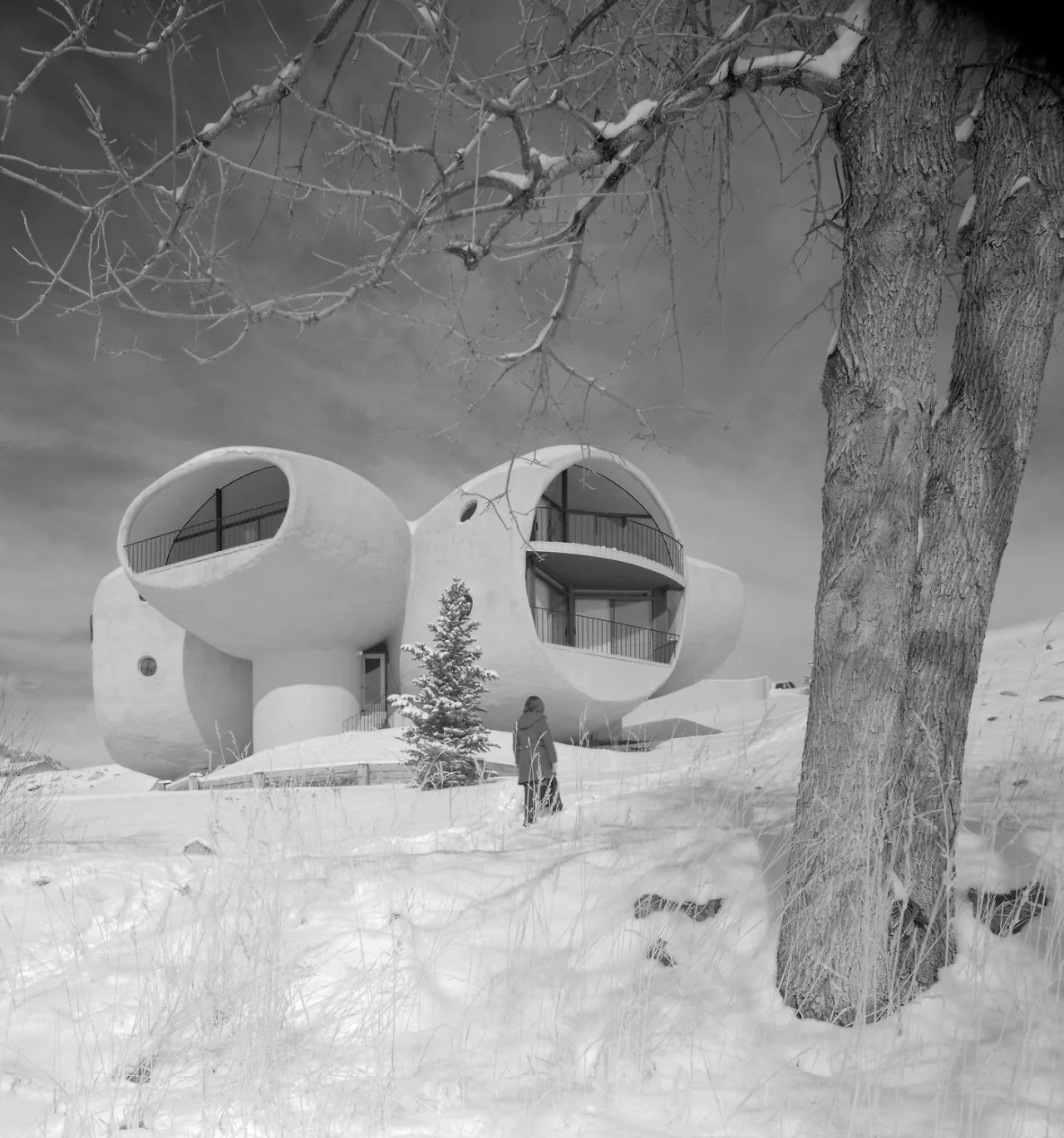 The Brenton House which is sometimes referred to as the “Mushroom House” was actually was inspired by the organic shape of barnacles and was built at 3752 Wonderland Hill, Boulder, CO

During his Navy years Haertling spent a lot of time chipping barnacles from ships’ hulls. A barnacle is a crustacean that attaches itself to a submerged object and then forms a hard curvilinear encrustation around itself. In the late 1960s the barnacle form was to be the inspiration for a house he designed for Dr. Stanley Brenton and his family. A sketch shows the barnacle influence.

The Brentons selected a beautiful site in Wonderland Hills subdivision directly above a lake with views of the mountains and sunset to the west, downtown Boulder and high noon to the south, and the plains and sunrise to the east. For two years they worked with Haertling on a design, often sitting on the site with the Brentons and talking about family, life, art and music.

This home became well-known thanks to Woody Allen briefly featuring it in the 1973 sci-fi spoof Sleeper.

​​​​​​​You can read more about the Brenton House here. 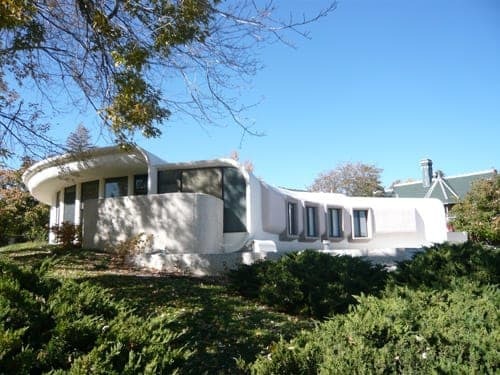 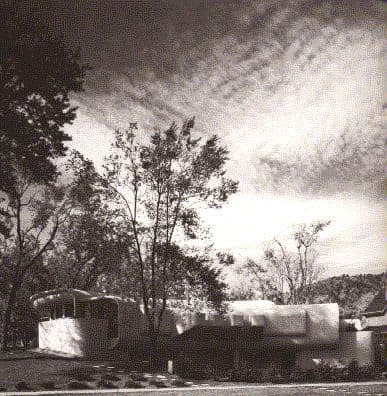 The former Boulder Eye Clinic at 2401 North Broadway. Haertling’s original plan was based on the shape of the eye with the entry naturally at the cornea and suites of offices and exam rooms along each side. 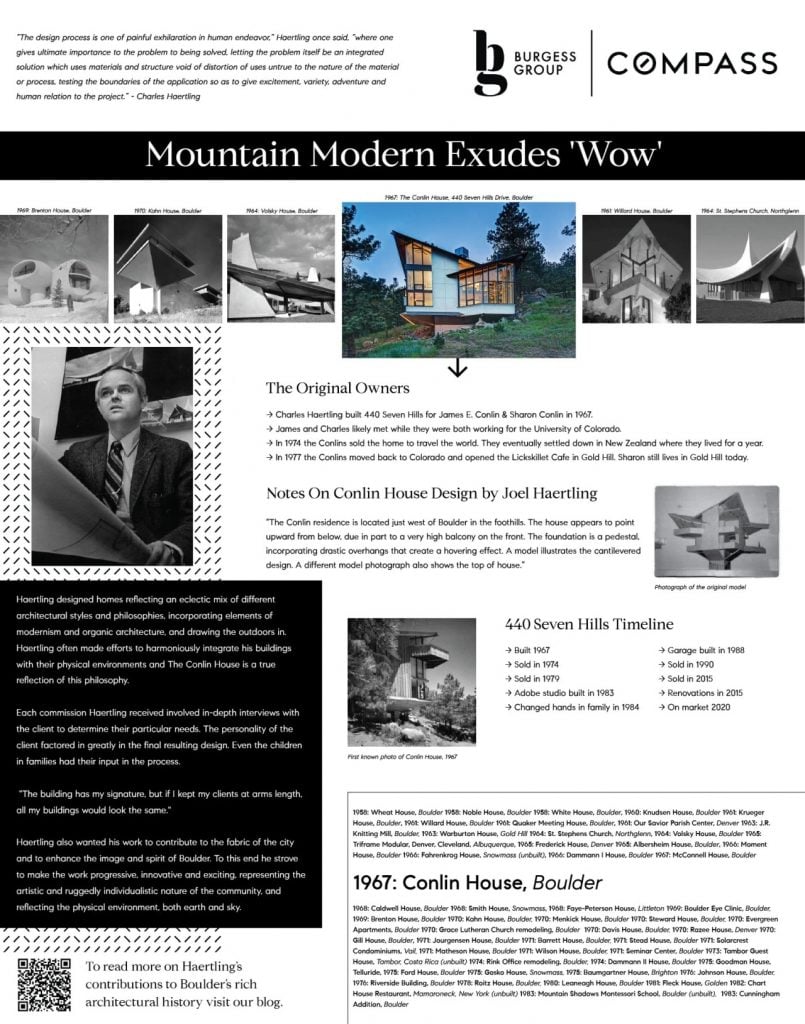