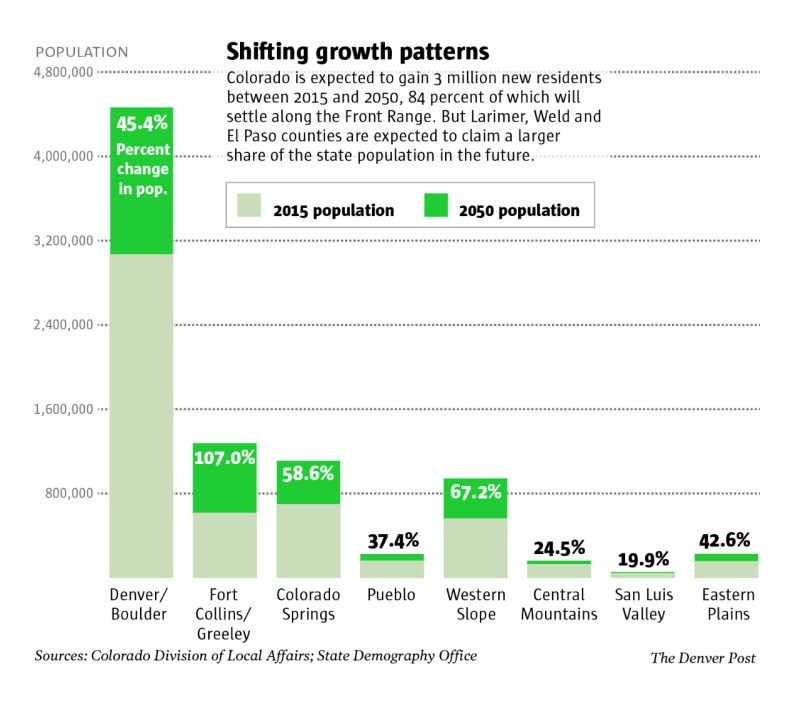 “Northern Colorado and the Western Slope will claim larger shares of Colorado’s population as the state adds 3 million new residents over the next three and a half decades, according to state forecasts.

Greeley and Fort Collins will more than double in population and the Western Slope will grow by two-thirds by 2050, the State Demography Office predicts, while Denver, Boulder, Pueblo and the central mountain resorts will grow at slower rates. Also, El Paso County will overtake a built-out Denver County as the state’s most populated.

Between 2015 and 2050, Colorado will add the equivalent of another metro Denver, on its way to 8.46 million residents. Though it’s a lot of people, the state’s rate of growth actually is predicted to slow during that period as the baby boomer generation moves on.

State and local officials use the forecasts to plan for growth, a hot topic as Colorado’s roads, housing market and environment strain from an influx of out-of-state migrants.

The Denver and Boulder metro areas will add 1.39 million people, the most of any region, a gain of 45.4 percent. But other regions will add residents at an even faster clip, which will push the metro Denver-Boulder share of the state population from 56.3 percent of the total in 2015 to 52.7 percent by the midcentury mark.

“It really is tied to jobs by industry and how those are forecast to grow in the state and country as well as population by age,” said State Demographer Elizabeth Garner. “We also make some assumptions regarding commuting. Weld has been a large commuter shed for the Denver metro and Larimer areas.”

Over the next 15 years, Denver and El Paso counties are expected to swap bragging rights for the state’s most populated, until El Paso finally pulls ahead of Denver, Cindy DeGroen, the state’s projections demographer, told the annual demography summit Friday in Brighton.

To the degree that communities with jobs fail to provide housing that lines up with the wages those jobs pay, people will commute.

“High housing costs put people in a pinch,” said Chris Akers, the chief economist with the demography office. “If earnings are the same, people may look at lower-cost areas.”

Outside the Front Range, the Western Slope’s share of the state population will rise from 10.3 percent to 11.1 percent of the total. But pretty much every other area, including the central mountain resorts, the Eastern Plains and the San Luis Valley, will lose share.

The Western Slope’s increased share will result from the addition of 378,697 people, which translates to a 67.2 percent gain in population.

Archuleta, Dolores, La Plata, Montezuma and San Juan counties in the state’s southwest corner, will see the strongest population gains on the Western Slope through 2050, at 78.1 percent, followed by a 70.9 percent gain in Delta, Montrose, Gunnison, San Miguel, Ouray and Hinsdale counties.

About a third of Colorado counties have lost population since 2010 and a third are now experiencing more deaths than births, DeGroen said. Looking forward, large swaths of southeastern Colorado are expected to lose population through 2050.

Those include Baca, Bent, Crowley, Kiowa, Otero, and Prowers counties, as well as Huerfano and Las Animas counties near the New Mexico border.

Over time, the state’s average rate of population growth will drop from roughly 1.6 percent a year through 2030 to a much slower 0.8 percent pace between 2045 and 2050.

Births minus deaths, or the natural rate of population, will fall to 1970 levels as a big demographic bulge of older adults dies off. Between 2030 and 2050, Jefferson County will see more residents die than are born each year, DeGroen said.

A rising death rate will make the state economy more heavily dependent, especially after 2020, on attracting workers from other parts of the country to fill open jobs, she said.”